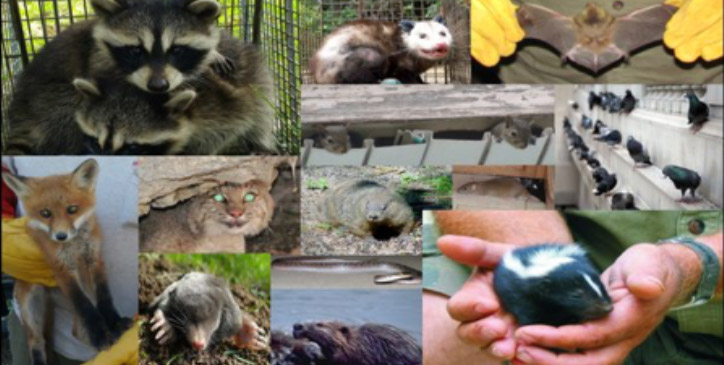 The State of Florida’s Fish and Wildlife Conservation Commission defines “nuisance wildlife” as wildlife that causes (or is about to cause) property damage, presents a threat to public safety or causes an annoyance within, under or upon a building. Due to the regulations regarding the trapping and release of “nuisance wildlife” the St. Lucie County Animal Safety, Services & Protection Division cannot provide this service. Any healthy wildlife caught in a trap will be released onto the same property in which it was caught. Relocating wildlife can lead to the spread of disease to other wildlife populations. A resident may contact a licensed wildlife trapper to remove nuisance wildlife. Consult your local telephone directory or visit https://myfwc.com/license/wildlife/nuisance-wildlife-permits/trapper-registration/ for contact information.

For tips on how to live with wildlife and steps you can take to deter them, please visit www.myfwc.com or click on the links below for more info.

Do not touch or handle baby wildlife. The animal’s mother is usually nearby feeding or caring for other young. If you believe the animal has been abandoned or its mother killed or injured, contact a wildlife rehabilitator or dial 911 and request an Animal Control Officer. (https://myfwc.com/conservation/you-conserve/wildlife/injured-orphaned/)

Gopher Tortoises are a species of special concern and are protected under the Florida Administrative Code 68A-25002(9). If their burrows will be impacted by construction or clearing it is important to follow proper permitting procedures to prevent harm to these tortoises. Please contact Florida Fish and Wildlife Conservation Commission at (561) 625-5122 to determine if a permit will be needed.

In Florida, there are 13 resident bat species. Many Florida bat species roost in colonies ranging from a few bats to many thousands, but some roost individually. Some important natural roost sites for Florida’s bats are trees with cavities or peeling bark, palm trees, Spanish moss, and caves.

Sandhill Cranes are notorious for leg injuries. But cranes with broken legs typically can still fly; thus their capture is virtually impossible. On the fortunate side, we know of many cranes with leg impairments that are living successful lives without treatment.

Along with the panther, the wild bobcat is one of two predatory big cats native to the Florida region. Bobcats are found throughout the state from the deepest swamps to suburban backyards. The bobcat is one of several wild creatures that still call Florida home. The adult bobcat can grow to about 50 inches in length and stand 21 inches tall and weigh 35 pounds. Bobcats typically do not approach humans but will do so if fed or taught to associate people with access to food. Bobcats can swim and climb trees with ease, two factors that prevent them from falling prey to natural enemies besides human hunters.

The gray fox is one of Florida’s most commonly seen carnivores. A gray fox weights 7-11 lbs. Gray foxes are adaptable, opportunistic carnivores, flexible in their feeding habits, and quite tolerant of people. They feed on small animals, fruit, and insects, but they will also eat out of garbage cans and scavenge road-killed animals. Gray foxes prey heavily on rabbits, but they also eat rodents, birds, insects, acorns and fruit. They are active at night and usually hunt alone. They move at a rapid trot, eyes, ears and nose alert for signs of prey. Gray foxes are most abundant in hardwood forests, pine-oak woodlands and brushy fields.

Coyotes are found in every Florida County. Sighting of Coyotes do not necessarily mean that they are more abundant where sighted. Coyotes are wherever there is suitable habit, regardless of whether or not they are seen. A sighting only confirms that coyotes are present. A Coyote can cover a distance of about 2.5 miles in a night while searching for a meal. Adult males range between 18 to 44 pounds and adult females range between 15 to 40 pounds.

Opossums prefer woodlands with lots of cover and nearby water. They are also common in urban areas, as they are attracted to almost any type of available food, including garbage, pet food, or cultivated fruits and vegetables. Opossums are generally nocturnal, foraging throughout the night. But it is not at all unusual to see an opossum out during the daytime, especially during cold weather. They also can be seen in the day when food is scarce or when they have been disturbed from their sleeping quarters. To prevent attracting opossums, garbage cans should be secured with rubber straps, and pet food should be taken in at night.

Raccoons are common throughout the state and occur everywhere there are trees offering the cavities they often use. They also tend to stay near a reliable source of water and are commonly found in urban areas. Raccoons are beneficial because they control populations of insects, rodents and other animals. Secure garbage can lids with a ratchet strap and store in a garage, shed or caddy until pick-up.

Raccoons are primarily nocturnal and usually become active in the late afternoon and throughout the night, but may change this pattern according to food availability or other factors. Many people think that a raccoon that is outside and active during daylight hours has rabies, however, activity during daytime is most definitely not a guaranteed indicator of rabies. It is not at all unusual for a raccoon to be active in the middle of the day as they may go off in search of food or drink. This is especially true of nursing female raccoons, who have a bunch of babies to take care of, and who have extra nutritional requirements, because they are nursing their young. In the spring, you're sure to see some mother raccoons gathering extra food during the daytime, so that they can produce more milk.

Rabid raccoons are very sick. Mostly, they are lethargic. Their walk may be erratic, or their legs paralyzed. They may be walking in circles or falling over, or lurching in an unnatural fashion.

Juveniles begin to move south during their first winter. Fully grown juveniles are a dusky-brown replica of their parents. Like other seabirds, the northern gannet takes several years to attain adult plumage, going through various stages of mottled dark-and-white plumages before becoming pure white with black wing-tips at four to five years of age.

Once a northern gannet fledges from its nesting colony and is in the water, it is apparently     unable to take off again for as much as two weeks. The bird is likely to begin its southward   migration to the Gulf of Mexico by swimming – not flying.

Northern gannets need to warm up before flying. They also walk with difficulty and this means that they have problems getting airborne from a flat area. They take off from water by facing into the wind and strongly beating their wings. In light winds and high waves they are sometimes unable to take off and they can become beached. They may well take flight and rest on the beach before taking off again once the weather conditions are permissible. Such resting on a beach does not indicate that the bird is ill or in need of help.

If you see a northern gannet on the beach, the best thing to do is leave it alone.

This iconic snake, with its bulbous head and red, yellow, and black bands, is famous as much for its potent venom as for the many rhymes—"Red and yellow, kill a fellow; red and black, friend of Jack"—penned to distinguish it from similarly patterned, nonvenomous copycats, such as the scarlet king snake.

They live in the wooded, sandy, and marshy areas of the southeastern United States, and spend most of their lives burrowed underground or in leaf piles. Coral snakes are extremely reclusive and generally bite humans only when handled or stepped on. They must literally chew on their victim to inject their venom fully, so most bites to humans don't result in death. There is little or no pain or swelling at the site of the bite, and other symptoms can be delayed for 12 hours. However, if untreated by antivenin, the neurotoxin begins to disrupt the connections between the brain and the muscles, causing slurred speech, double vision, and muscular paralysis, eventually ending in respiratory or cardiac failure.

You can report a wildlife violation via phone at 1-888-404-FWCC, you can use your cell phone to call *FWC or #FWC or text Tip@MyFWC.com or online at https://myfwc.com/contact/wildlife-alert/report-online/.