Show/Hide
All St. Lucie County beach accesses will be closed July 3-5 to help slow the spread of COVID-19. 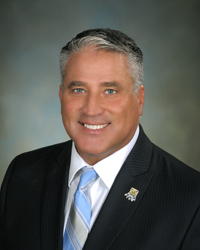 Chris Dzadovsky first visited St. Lucie County in 1994, and made our area his permanent home in 2003.

The Pittsburgh, Pennsylvania native's career experience includes owning his own businesses, being a volunteer firefighter, and 25 years as an airline safety professional for US Airways. While with US Airways, Chris became the Communications Director, Legislative Affairs Chair, and worked for the Association of Flight Attendants/CWA.

Soon after moving to St. Lucie County permanently, Chris began volunteering with the Fort Pierce Jazz Society, with Hibiscus Park as a Neighborhood Crime Watch captain, and with many other non-profit and neighborhood organizations.

Throughout his eleven years in office to date as St. Lucie County Commissioner, Chris has fought through a severe recession and worked to ensure that St. Lucie County remained financially solvent, while continuing to provide the important services our residents and visitors expect and deserve.

Chris has been a member of the Roundtable of St. Lucie for eight years (2008 – 2016) where he worked diligently to support efforts to better the lives of children, fought for funding for programs to reduce gang violence, and advocated for the Kids at Hope initiative (which resulted in St. Lucie County becoming the first "Kids at Hope County" in the nation).

Chris served as Chairman of the Tourist Development Council (TDC) from 2010 -  2019.  Under his leadership, the TDC increased its revenue by 51% or, $4.1 million. This all-time record provided more than $1 million in grants for capital improvements and expansions to the National UDT-Navy SEAL Museum, Heathcote Botanical Garden, and the A.E. Backus Museum & Gallery.

Additional sports-related TDC projects under Chris' leadership include the expansion of Mets/Clover Park (previously known as First Data Field) to create a better experience for fans while increasing stadium revenue and an extension of the Mets contract to remain in Port St. Lucie for another 25 years. Chris helped to ensure that all taxes used to fund the Mets/Clover Park expansion are paid by tourists (the “bed tax”) and not by County property taxes paid by St. Lucie County residents.

Chris has worked cooperatively with the Treasure Coast Sports Commission to bring many new events to the region.  The regional economic impact of these events has surpassed $50 million and, in St. Lucie County alone, the impact has been more than $21 million.  St. Lucie County’s successful initiatives have included the expansion of the National Volleyball League Competition at Club Med, the US National Firefighter Combat Challenge, Florida Swimming vs. FGC All-Star Meet, Florida AAU Karate District Championships at the Havert L. Fenn Center, and a multi-year agreement with the Southern Kingfish Association (SKA) Pro Championship. The Treasure Coast International Airport and Business Center benefited from Chris' TDC leadership through matching dollars with State grants to improve and expand its terminal, customs facility and entrance and parking areas, as part its overall marketing plan.

Chris is an appointed member of the Indian River Lagoon Council (IRLC) and has served as Vice Chairman and Chairman of the Council in 2017 and 2019, respectively.  Chris' dedication to a healthy and safe environment is well-known as he continues to fight tirelessly for a clean and sustainable lagoon system.

He also serves on the Land Acquisition Selection Committee, which advises the Board of County Commissioners on appropriate land purchases, under the voter-approved preservation and conservation programs. Over 10,000 acres have been purchased through matching grants, totaling a value of over $70 million for St. Lucie County citizens and visitors alike.

As one of four County Commissioners serving as a board member of the Transportation Planning Organization, Chris works in cooperation with representatives of Fort Pierce, Port St Lucie, the St. Lucie County School District and transportation representatives to ensure responsible planning for roads, sidewalks and bike paths throughout the area.

Chris also serves as a member of the Treasure Coast Regional Planning Council, Blueway Advisory Committee and serves as an alternate member to the Value Adjustment Board.

He has been a board member of the St. Lucie County Fire District throughout his eleven years in office, and has served as the Chairman of the Fire District board.

In addition to his official county committees, Chris leads many volunteer neighborhood clean-up programs. He is a founding member and past board member of the Sea-Life Habitat Improvement Project (SHIP), which holds the annual Oysterfest event and donates to oyster bed restoration projects. SHIP has also raised funds for artificial reefs as a habitat for off-shore fisheries, with an added benefit of increasing fishing and diving tourism to St. Lucie County.  The most recent project was the sinking of the Voici Bernadette in 2019.

Chris has received the Outstanding Environmental Services Award from the St. Lucie County Conservation Alliance in 2010, as well as the United States Green Building Council Treasure Coast Chapter’s Outstanding Green Elected Official Award in 2012. He has served as the President and founding member of the Solar and Energy Loan Fund of St. Lucie County (SELF).

* Please note: Under Florida law, e-mail addresses and emails are public records and available for inspection and examination by any person desiring to do so. If you do not want your e-mail address or email released in response to a public-records request, do not send electronic mail to this entity. Instead, contact this office by phone.

Free viewers are required for some of the attached documents.
They can be downloaded by clicking on the icons below.